January 6th saw me finally decide on the final packaging for my products and I took many pictures of my new, pretty packaging before sending off my parcels to their new owners!

Jan 7th I spent the whole day organising my deadlines for things I want to make, blogs I want write and other boring admin things.

Jan 8th I watched Sir David Attenborough’s ‘Zoo Quest’ from back when TVs were in black and white and David was handsomely wandering madagascar in a pair of converse. Of course i got a lot of sewing done as well.

Jan 9th I went to Alexandra Palace to try and shoot my own nature documentary of sorts, unfortunately the creatures I wanted were not to be found and so I got Ash to take a few photographs of a new product I was wearing instead. Whilst we were there we saw this man ecstatic to be feeding pigeons. His enjoyment was contagious and I couldn’t resist a few snaps of him. 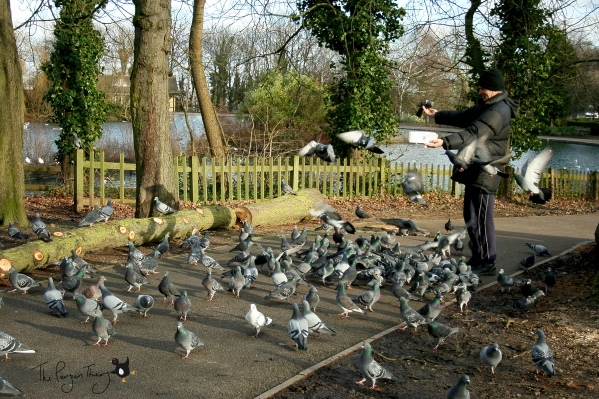 On the 10th I had a horrible headache (probably from not sleeping enough) and just climbed into bed as soon as I was home from work.

On the 11th a friend who has moved to Denmark was back for the weekend and had a gathering. Unfortunately I had to leave early for work (the story of my life!) but at least my shift wasn’t too bad.

Today, Jan 12th, I have again been mainly organising and watching nature documentarys. But I did make a delicious stew type thing in my slow cooker! It’s a shame it came out extremely watery, but tasted nice enough.

Next week is horrendous shift wise at work, but hopefully I can still keep up with some daily photo’s, even if they’re just from my phone.

I’ve decided that once this craft fair is done I will be looking for a new job.

I need more regular hours, I need better pay and I need to feel like my needs are taken into account.

Thats not to say I don’t like my job and the people there and they don’t look after us (most of the time), but I have been thinking of leaving for a while and last night I felt like I really didn’t want to be there.

In all honesty the main reasons I’m leaving are because of money (especially now we’re hiring more staff and my shifts are going back down to 20hrs from working 40+ hrs) and because I’m finding the constant change in my sleep pattern is taking it’s toll.

I would like spare money to put aside so that I can afford holidays and other nice things, I would like to have a routine to my day so I feel I can be more productive. This job allows neither of these things and so I know I need to look for fresh new pastures.

The thing that has tipped me over the edge though from it being a ‘I should, but I like it here’ to a ‘Yep, I need to leave now’ is the fact that it’s so hard to book any time off. I know it’s probably because we’re so understaffed for the moment so not really my bosses fault, but I never seem to be able to book any time off. Sure I had my trip to China, but i’d told them about that in my interview and so they knew about that before I even started and knew there’d be no way for me to work. I’ve only tried booking time off twice since and both times the rota has been changed a couple of days before making it hard to find cover or even cancel the thing I was booked off for (or at least cancel with a chance of getting my money back).

This time I’d booked off this sunday for the Frost Fair in North Finchley I will be attending. I’ve put down money on a table and with 2 days notice there would be no chance of me getting money back and would have created a pretty bad name for myself with my first big craft fair.

I spent my whole shift last night trying to figure out a way to get it covered and asked everyone I could, but they all had good reasons as to why they couldn’t cover. Eventually one of the new staff agreed to swap. She’s now doing my day shift and I’m doing her close down (pretty good swap for her! Everyone hates closing down).

However this does mean I’ll be working a finish on Saturday (so wont be home until about 2 or 3am), getting up at 8 for the frost fair and then doing another finish that night. I might not be functioning at my best but I will just man up and deal with it.

I think i’m just getting tired of this job in all honesty. I love the people, I love the sociable aspect, but i’m just tired. Constantly tired.

I would like to find a new job in something creative, maybe in a small shop, or in a theatre. Sure they might not pay much better, but at least the hours might be a bit better suited (i.e. no 3am finishes as well as 8am starts). Plus I think i’d have more time to put into this Penguin Theory, or at least I’d spend less time procrastinating through tiredness (as of now it is nearly 1pm and I’ve done nothing on my list of things to do for sunday).

So if anyone out there is looking for an assistant, a receptionist, a saleswoman, even a coffee maker in London/North London. Please don’t hesitate to contact me. All I ask is that there will be no early morning finishes! (at least not on a regular basis)